Do You Really Understand Your Business Model?

You’ve heard about them, you’ve even told people you have them; but the truth is, most people wouldn’t know the first thing about creating an official one. I’m talking about business models.

Can you define your business model or structure at a strategic level? To this point, has it mostly just been business as usual, so you haven’t felt a pressing need to quantify exactly what you do? Most business owners will tell you that they have a business model, but many really don’t understand their own business.

It goes beyond, “We make stuff and we sell stuff,” but it’s not so complicated you need to be scared away from the concept.

One of the exercises I’ll sometimes use with a client is to ask them to draw a picture of their business on one piece of paper. Some draw a picture of a building with people working while others draw a diagram with the beginning-to-end process.

Ultimately, it doesn’t matter exactly what they draw. As long as they can define what their business looks like and communicate it to others, they can develop a business model.

Odds are you have the mindset of a traditional top-down business structure. It’s what the world has been operating with since we started going to work centuries ago.

But now you’re reading in the business magazines and hearing from the young people who work for you that they’ve been taught that a matrix model of management works better in the 21st Century. You’ve tried to understand it, but just don’t see how it could make your organisation operate more efficiently.

There’s a chance that a different structure could work for your business—but there’s also a chance it may not. It’s completely legitimate to have qualms about changing things, and this brings us to the idea that owning and operating a business and keeping it solvent is not a science, it’s an art.

You can try to run scenarios and forecast impact assessment on what will happen if you evolve toward a different model. There are likely benefits as well as negatives to what could happen.

You probably also have a model by which you tackle projects, but wonder if it’s still the most efficient way. You’ve stuck to the waterfall model, but much like top-down vs. matrix, you hear there are “agile” project management models where things can be done quicker and cheaper.

The important thing is that you don’t get stuck in one model and be too inflexible to change.

If the matrix model doesn’t make sense for your organisation, don’t force it, and don’t assume there aren’t other models that could work better than the one you’re currently using.

What if you tried an upcoming small project using an agile style? If it’s a horrible fit for your business, you’ll minimise damage, but if it does indeed improve the speed and profitability, you now have a better way of doing things.

There are more books than you could ever read about embracing different models for your business, but the most important piece is that you be flexible enough to implement changes while also allowing yourself to recognise when things aren’t working and pull the plug. 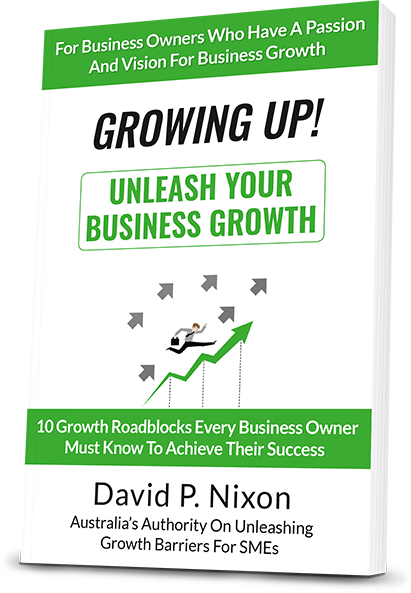 I have just published a book entitled Growing Up – Unleash Your Business Growth aimed at business owners who have a passion and vision for Business Growth. If you manage a medium-sized business, are battling with growth roadblocks and have a passion to change, I will be happy to send you a copy of my book free of charge. (Yes, it is a real book, not an eBook).

Just follow the link at www.unleashyourbusinessgrowth.com David Nixon is Director, Advisor, Author and Entrepreneur and is recognised as Australia’s Authority on Unleashing Growth Barriers for SMEs.